Three weeks are left in the season and the heat is building the AL. It’s fair say the Red Sox, Indians and Astros have their futures locked for the playoffs. The wildcards, not so much. As of today, the Yankees and Twins would make the show, however, with approximately twenty games to go, nothing is written in stone. The Angels, Rangers, Mariners, Royals, Orioles and Rays are still in the hunt. After watching the Rangers implode against the Yanks this weekend, I can’t think of one reason I’d like to see them make it. It would be a repeat of last years utter collapse against the Blue Jays. Seriously, of the five teams still chasing for the slot, I don’t see any of them knocking off the three league leaders. The Yanks do have the best chance of beating one of them, but if they start slipping, they too could be watching the play-offs from their homes.

The National League is much more entertaining. The Dodgers didn’t have a slump all season, but September is rearing its ugly head. It wasn’t long ago writers were comparing them to the 2002 Mariners who couldn’t lose, until they go the play-offs and were swept! If they can’t find their magic wand, it is possible for the Diamondbacks to catch them. Wouldn’t that be something?
The Central Division is still not settled. Yes, the Cubbies are in first place, but for how long. They have battled all year to reach 1st place, but they have the Brewers and Cardinals nipping at their heels. Of all of the teams, the Cardinals to me, are the most dangerous. They have a knack for making post-season play and then lighting up the competition. Just ask the Rangers of 2011 how that worked out.

There is no doubt about it, it’s going to be a race to finish with the possibility of more than one, one game elimination to determine the post season landscape.

Here is the proposed book cover for Sabotage. All thoughts and comments are welcome. 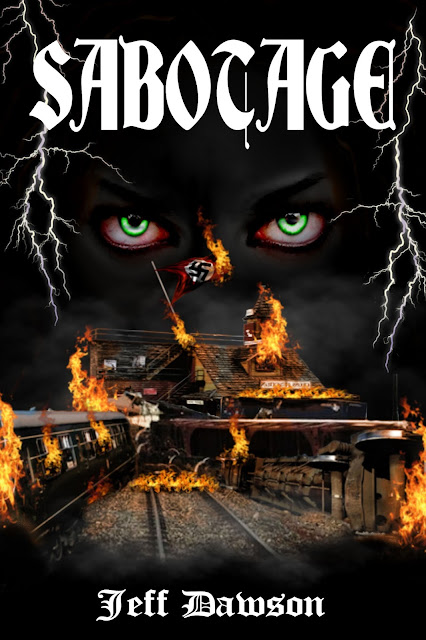 
Once again, the Democrats are trying to erase history where no controversy existed, expect in the annals of political correctness. The City of Dallas City Council voted 13-1 to remove the statue of Robert E. Lee, with a Confederate soldier, at Lee Park, which is in the Turtle Creek neighborhood. By luck, a judge issued a stay on its removal as crews were preparing to remove it. Actually, if the stay would have come thirty minutes later, the statue probably would have already loaded on the flatbed.
One of the councilman who voted for this flagrant disregard of history states.

"We do not need a task force to tell us right from wrong," councilmember Philip Kingston told Fox 4 News. "These monuments represent a false telling of history."

What false telling of history is he referring to? Perhaps he thinks the statue represents the South won the war? Maybe he believes all those “deplorables” that voted for Trump are going to let the South rise again? Or maybe it’s that Lee stands for oppression? On all three counts, he would be seriously wrong. He, like many of the rabid anti-fa activists and their supporters need to bone up on history, and fast! One: the South didn’t win the war. Two: Better check out the Electoral College Voting and the popular vote when it comes to states like Pennsylvania and Ohio. Yeah, those are Yankee states. Three, the last thing Robert E. Lee stands for is oppression and the Civil War. He did not want the war and hoped Jefferson Davis and others would come to an amicable agreement to avoid the bloodshed he knew would come.

When the die was cast and succession became a reality, he was torn between a country he loved and defended, and his home state of Virginia. He could not see himself warring against his own statesmen and friends. He, like many, that were officers in the United States Army had to make a choice and they chose to honor and serve with their fellow brothers. They were driven by a sense of duty and honor that is seriously lacking today.

General Lee was highly regarded as a great tactician and gentlemen, before, during and after the Civil War, even by his Northern brothers. He was asked countless times for his opinions on how the North was governing after the capitulation. In his letters, he showed he wasn’t pleased but that it was the duty of the defeated to weather the storm and unite the country. At any time, he could have spoken out against Lincoln, Johnson and Grant. He wouldn’t do it. The country had bled enough and it was time to reconcile, rebuild and heal.

The irony I find in today’s debate is that Lee was a traitor and committed treason against the United States, thus, all his statues should come down. Okay. But before you jump on that bandwagon, you better hold “Hanoi Jane” Fonda to the same standard. Like Lee, she aided and abetted the enemy during the Vietnam War. Yet I hear no outcry from the left. Why? Because it would subvert their narrative on righteousness. The same goes for the thugs that support anti-fa. They are no better than the Brown Shirts of the 30’s. They have been given a license to destroy and attack those they don’t agree with. And yet the press praises them as liberators and activists for a just cause. What cause? The undermining of the United States government? Exactly. Why aren’t they being rounded up and imprisoned? Again, it would defeat the current narrative of the press and the left and that can’t happen.

If Lee would have kept up the good fight and spoken out against the victors, our country could have endured a guerilla war that could have lasted decades. Instead, he took the high road and remined his followers that they had fought a good fight, but it was time to lay down arms and begin working on the peace. Resistance would only prolong the inevitable and achieve nothing more than more destroyed property and lives.

Lee never wrote a biography despite receiving many offers to do so. The closest we have for historical analysis is the book his son, General Robert Edward Lee, published. It provides an excellent insight into this great man and his love for his fellow man; a lesson we can all learn from, it we take the time.

So, if you want to eradicate him from the history books and vilify him, that’s your choice, but in the end, the only action being perpetuated is the smearing of great American patriot.
Posted by Jeff at 3:50 PM No comments:


I want to thank the media and social media warriors for creating the biggest dumb-ass-itis in the DFW area since I moved here in 1983. For the conspiracy theorists, what happened today will support any thoughts you had on how the media can influence people. It started last night when people started talking and posting about fuel prices rising. Okay, Hurricane Harvey slammed into Gulf Coast of Texas. This will affect production levels in Texas, but not in Tulsa or Ponca City. I blew it off as pricse have been fluctuating for the last three weeks or so. We saw them go up with Katrina, Ike and the Deep Well Horizon platform. No biggie, but you knew something else was coming and this morning it started. “Fuel Shortage in DFW!”  Really? Let’s see, I went to the Raceway I trade with at 7am. No lines, no panic, no hysteria and plenty of fuel. Got my coffee, a few scratch-offs and went back to work. What a difference four hours makes. While working on bids, I would check on FB and twitter for the dreaded updates. It had exploded! The media and all their minions on social media took the gospel, hook, line and sinker! I went back to the same store at 11:15am. It was packed with morons trying to fuel up over a shortage that didn’t exist. Did I fill up? Hell no! I have ¾’s of a tank and know how far it will get me. You could tell this was going to get ugly real fast.
Driving to Plano to see my Optometrist revealed how effective a “fake story” can be. SpringCreek Parkway and US 75: RaceTrac-out. 7-Eleven-out. Quicktrip: line of cars blocking the services roads waiting in line. Costco-cars lined up on the service road.  Flash forward to tonight. Quicktrip, depending on the location, you could count on one to two hours waiting time. And for what? That’s right, a major gas shortage in the DFW area. If you were one of those who spread the word, you are just as responsible for this CF as the media. There is, no wait, there is a gas shortage now because of the crap that was being spread around.
The press has yet to report how many fights broke-out at stations over a non-event. I have one report that a friend was almost involved in three fights and a woman tried to run him over getting to the pump. And for what? That’s right. The imaginative fuel shortage you all bought into. Now, if you’re sitting their shaking your head and deciding I’m a raving lunatic, then I will assume you posted that there was a fuel shortage. If I offended your sensibilities, then you were also part of the problem.
But the effects aren’t over. Oh, no. Not by a long shot. This is Labor Day Weekend. Stores had already placed their orders for the influx of driving. Well that’s going to be a mess because none of them could ascertain or plan for the rampant panic and hysteria that gripped the DFW area today and for the following days until the tankers can replenish all the dry storage tanks. Hell, the folks from Corpus Christi to Houston just got the shit kicked of them and have managed to keep it together, keep it calm, and maintain their sanity when many know, they have lost everything. For the folks in the DFW area, you have truly embarrassed yourselves believing “fake news.”. And that is nothing to be proud of.

So, to all of you so called social media warriors out there and those of the press who posted unsubstantiated news, I hope you learned your lesson today. If you defend your actions, go look at a brick. It has more common sense then you will ever be able to fathom.

***NEWS ALERT.***
TRUMP NUKED NORTH KOREA.
US INVADES JAPAN.
HITLER ISN’T DEAD.”
And last but not least,
“ALL RESIDENTS IN MANHATTAN, NEW YORK HAVE FORTY-EIGHT HOURS TO PACK-UP AND MOVE. MAYOR DIBLASIO SOLD IT BACK TO THE LENAPE INDIANS.”
Posted by Jeff at 10:27 PM No comments: