A five years ago, one my dearest friends Joni Mackintosh, lost her uncle Wallace Russell. He was one of the last of our "Greatest Generation." I had the privilege of listening to some of his stories. He served on the old Yorktown CV-10. During the war, he traveled over 36,000 miles. She and her crew were involved in every major battle in the Pacific Theater. This is my tribute to him and the millions of  men and women who served our country during that tumultuous time in history. Because of their sacrifice and service, we are allowed to enjoy our cherished freedoms. 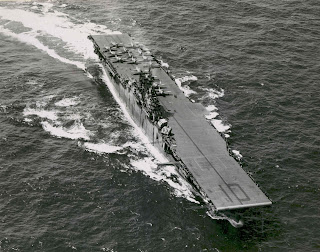 
In the Virginia sunlight.


The call to arms,


Was a distant sound.


She patrolled the Atlantic,


She moved through the canal,


The mighty Pacific would be her home.


December 7, she rested no more.


They boarded the decks,


Prepared to fight the Japs.


American what? Where? When?


“And then the Gilberts and Marshalls.”


The claxon sounds disrupting the boredom,


We ask no questions,


we answer the call.


“All hands to battle stations,


We breathe a sigh of relief.


Back to Pearl for replenishment.


Coral what? Where? Why?


“All hands to battle stations.”


She dances on the calm sea,


Avoiding the white tails of death.


We fire fast and furious.


One by one the planes fall.


“Be careful of the boys flying CAP!”


We aim straighter and tighter,


Thunder and smoke drown our voices.


A dreadful baptism of fire.


The day was ours,


And a needed leave.


“All hands back on board.


Midway is in peril.”


We know the score,


We know the cost,


We know we must fight!


The air fills of tension,


The battle is shifting,


The victory is short lived.


She takes one in the stack.


The smell, the carnage of,


Fragments of comrades stuck on bulkheads,


But calm and resolve fill us.


“We will go down fighting!”


But the loss is high.


She was my home,


She was my piece of the war,


As the sun fades, the mighty lady,


succumbs to the sea.


I salute her, one final time.


Closing my eyes for the final salute,


I join the minds of my comrades,


submitting my soul to God.

Jeff Dawson @2013 LDDJ ENTERPRISES PUBLISHING
Posted by Jeff at 11:19 AM