Good morning to all. The next feature will be from some talented writers who served in the armed services. While compile the tribute, I wanted to give a "shout out" for the upcoming event in Dallas,Texas. The company which designed the new t-shirt is hosting an event for Independent Artists May 25th. Here's the link: http://indiemarket.alexamachine.com/home/confirmed-performers/ Very appropriately named: INDIE in the Big D.

With that out of the way, let's throw a little humor in the mix. This is an excerpt from the critically acclaimed, "Goober and Bill." Maybe not so critically acclaimed. Can't win 'em all.
Yes, this is a picture of me and my youngest, Shawn. Enjoy our adventures! Are they true? Well...... 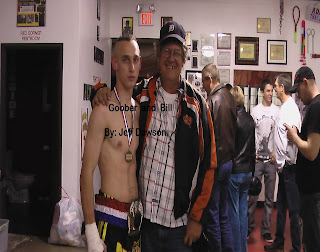 Goober and Bill
Part One

Goober is preparing to embark on an evening of wonderment and excitement. His first date in thirty- five years! What an accomplishment. One would think that the father would be proud that his son has finally taken some initiative and is going to venture out of the house at age twenty-five. Wrong! Bill has endured his son for so long that the last
thing he wants is some twinkle toed little girl to seduce his son and take away the father’s errand boy and housekeeper.

For years, Bill has badgered his son to get out of the house and see what life has to offer. Goober would wave his hand with a dismissive flick and mumble, “Old man, worry about yourself,” then walk into his room and slam the door. “Old man,” the dad would yell out. “Old man!" Bill yells out. "One day son, I will show you the meaning of “Old man.” He could hear words coming from behind the door that weren't discernible, but he knew what the son was saying.

Date night is rapidly approaching. Bill believes he has a fool-proof plan in place and the date his son is so looking forward to, crashes and burns. Not many words have been spoken through the week other than the customary salutations:

The day of the Goober's date arrives. You could cut the tension in the air with a knife. Goober has not been able to save up enough cash for his own wheels and dad knows he will be asking for the truck keys. Hey, it's not like the son hasn't been working hard. Going to school, working out ,and umpiring for extra cash. Irrelevant. If the boy would have ventured out at an early age, dad would gladly have opened the door and slammed it as the boy went down the sidewalk. But that day has come and gone. He had his chance and there is no escape! Or so dad thinks.

It does not look good for the son. The son has detected the building tension and shrugs it off as “old man crabbiness.” Little does he know that a fatal show down is lurking just around the corner. The boy will not get out of the house without a fight!

The night arrives. Bill is watching a baseball game. Goober is milling about as If he has some type of nervous condition. His constant puttering has gone on long enough.
“Boy, sit down and quite pacing around like a stray cat but while you're up, bring me a beer." Goober stops for a moment, stares at his dad and very and I mean very begrudgingly goes to the refrigerator to obtain the desired cold beverage. As he grabs the can the following thoughts worm through his brain, “if that old man doesn't give me his truck keys, I am going to open a can and then stomp a mud hole in him.”

The requested beverage is delivered without mishap. Bill pops the top without thanking the son (Hell, it's his job to bring the beer anyway), and settles in for the game.
Goober believes the moment is right and asks for the truck keys. Dad responds with a small quiet laugh. He looks at the boy and replies, “not on your best day. You aren't going anywhere. Enjoy the game or go to your room. You are interrupting the peace and quiet.” Most sons' might actually listen to their father's wishes, but not this time. The son stands up and demands the keys. “Look old man, I brought you a beer, cut the grass, and I have a date. So give me the keys or I'll stomp a mud hole in you!”

Bill is not impressed with the outburst but is more disturbed that the ball game is being interrupted by his son's outburst. He slowly gets out of his chair, reaches deep into the pockets and removing the keys He looks down at the keys, slowly raises his head, looks his son in the eyes( a small smile is creeping into the corners of his face) raises the hand that holds the keys and speaks. “Son, I guess you deserve this tonight.” He holds out the keys with his left hand. Goober makes a move to retrieve them. What he didn't see is Bill's right hand (with the bottle of beer) heading pell-mell towards his face. Dad's fast moving right hand splits the Goober's lip wide open. The son replies with a strategic shot into the left knee, dislocating the old man’s left knee that had been repaired twenty years ago from a roller skating accident. Old men roller skating. Must have a hover round ring.

They evaluate the wounds and how the next round will be played.

They both take a seat on the couch. The son is in insistent on the truck keys. Dad
delivers a short jab to the abdomen, which in turn is answered by a knee to the forehead.

Score is still deadlocked at 0.

Preparing to speak, Goober interjects that he has no intention of marrying this girl (I caution the reader to remember that it is very possible the son has studied the manual
concerning picking up girls. Remember the Warning…Warning chapter three of
“Unmarried with Children”. Bantam Books 1998 by Herr Dawson. Found in fine grocery
stores everywhere). Lost track. Ah yes, let us assume the son has read that chapter. Dad has, he wrote the book! Goober is just going out on a date.

Bill starts laughing hysterically at the thought of his son just going out on a date and slumps over faking a heart attack. As the son leans over to assist him, he is met with a wicked uppercut that jars his senses to the moon. Bill, feeling he has gained a point and the upper hand, stands over him triumphantly (more like hobbles with the damaged left knee) thinking he has delivered a knockout blow. As he is about to pat himself on the back, a burning sensation is felt in his groin and is progressing rapidly to white flashes in his eye. Temporary blindness can be a very frightening thing. The son reiterates (while rubbing his sore jaw), that all he wants to do is grab a burger (the word fur is mysteriously left out) and catch a movie with her.