Good morning across the globe. Here's another excerpt and a look at the preliminary book cover. I think the plane and wing need to be a little lighter for more resolution. Might make the font a little smaller for DESTINATION D.C. A few other tweaks and it should be good to go. If you any suggestions or comments, don't hesitate to add them. Okay, here's the cover. 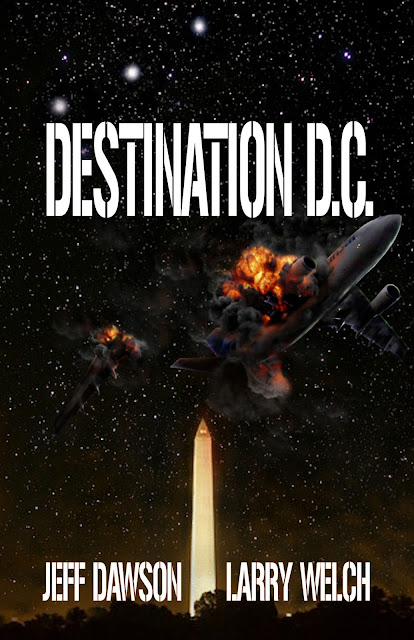 “It’s still tracking them boss.”
“Good. You can turn it off now. We’ll get them when we’re ready. Nobody leaves my town with that much money, not even the professor.”
Nathan remembered fondly the day he met Leonoid Skorzenzy. The man would come to the casino twice a month, only playing black jack. He might have been a brilliant scientist, but his gambling abilities were poor at best. In six months time, he’d run up a debt of over $100,000. Nathan kept comping him on the basis he would get something more than money for the debt.
Leonid showed up on his regular night at the same table. Nathan approached him.
“Professor, we have a matter to discuss.”
“I know. I don’t have your money. I have something better.”
At first he didn’t understand what could be better than cash, but based on their discussions, the professor might have something that would enhance the security surveillance system.
Leonoid opened his hand, dropping six small devices on the table.
“Mr. Francisco, those are the most up-to-date tracking devices in the world. They work off several NSA and NASA satellites. They can detect a gnats ass on a rain barrel, if you’re looking for a gnats ass.”
“Not a gnats professor, more like weasels and rats.”
“Then these devices and the chip I’ll install in your GPS tracker will more than assist your endeavors. You do you have a GPS tracker in your car?”
“No.”
“Then get one. I will swap out their chip with mine. The trackers I’ve brought are easily installed. They have a magnetic system that adheres to almost any surface, say the wheel well of a car. Throw a little dirt on it and no one will notice it.”
He studied the idea of hiding a tracking monitor on a guest who failed to pay up, or won big one night, with the intention of leaving town the next morning with his money. Yes, the trinkets the professor offered as payment would more than cover the debt.
“Professor, you have a deal. One question, how can I trust you?”
“I am a man of my word. I work at the complex northeast of Pioche. This is my phone number if you need to contact me. The place was shut down by order of Uncle “Stupid” Sam. I stayed behind to keep everything working, waiting for the day General McCulloch and his cronies decided the creation is ready for use.”
Nathan could care less about politics or secret bases. His word revolved around cold, hard, cash.
“Professor, if the devices you’ve provided don’t live up to your projections, I assure you, I’ll be dropping by for a visit.”
Skorzenzy was becoming flustered. He was ready to play cards.
“Nathan, if you don’t want them, I’ll take my business elsewhere!”
“No need to get antsy professor. The chips will buy you another $100,000 in credit.”
He nodded to the dealer, and the cards began to fly, as did the debt.
When Skorzenzy didn’t show up on his normal day, owing the house $150,000, he decided it was time to visit the professor at home. Instead of finding his query, he was pleasantly surprised to find the Camaro which eluded them a week ago.
He and his boys walked around the building, trying to find their prey. He called the professor’s number several times with no response. Going back to his car, he retrieved one of the devices, placing it at the top of the front right wheel well.
He turned towards Alonzo. “Maybe we’ll kill five birds with one stone, eh Alonzo?”
“Sounds like a plan boss. Sounds like a plan.” Each man shared a calm laugh.
“Let’s get back to town. It’s time we paid a visit to Mr. Wilson. He’s three weeks overdue.”

Copyright@2013 LDDJ Enterprises Publishing
Posted by Jeff at 11:15 AM