A project I began working on. All thoughts and comments are appreciated. 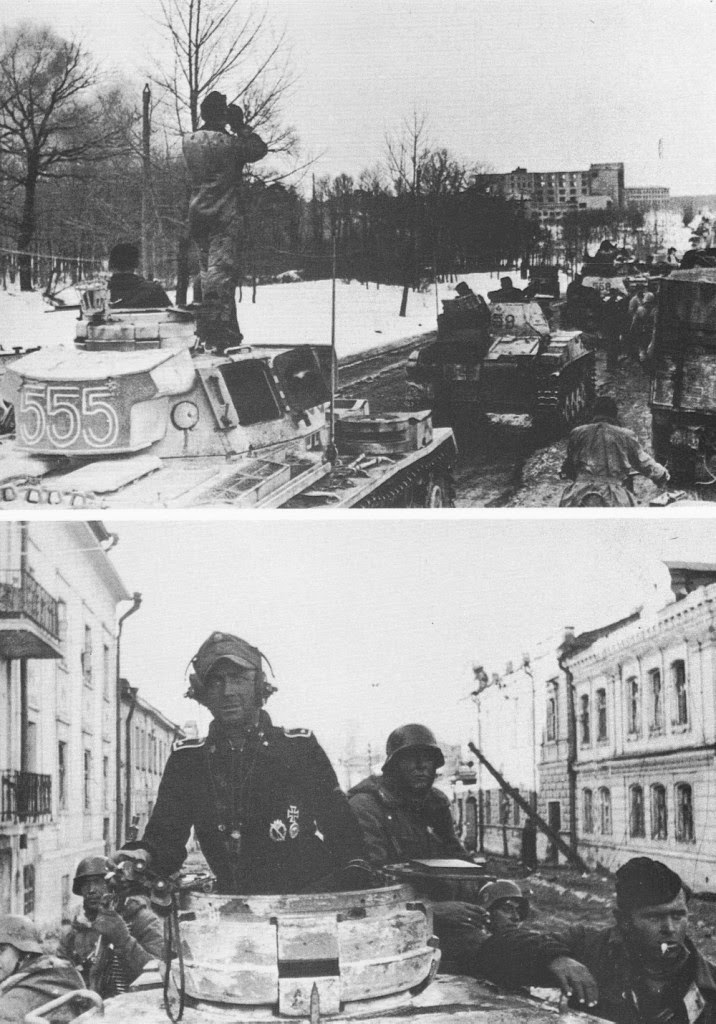 
For the last two months Krueger and his battalion were on the defensive. Their unit of the 505th heavy armored brigade had been in combat trying to stem the unending tide of Russian armor. It didn’t matter how many tanks they destroyed or men they killed, the next day would dawn with the same infinite number filling the horizon and his gunner, Hans’, gun-sight.


He caught himself reflecting back to the day he graduated from Bad Tölz. His heart swelled with pride as the training class passed by the viewing platform where Paul “Papa” Hauser, General Heinz Guderian and Adolph Hitler viewed the new graduates. He viewed himself and his mates as those who would restore Germany to greatness. He eyed with envy, the Knight’s Cross Heinz wore around his white, starched shirt. He swore, he too would proudly wear the medal for all to admire.


His battalion’s performance around Sevastopol, in 1942, won him the coveted piece of tin. His unit, attached to the 17th Army, contained the Russian surprise amphibious counterattack on the Kerch peninsula allowing his comrades to snuff out the serious threat to the 17th Army’s flank which was completing the encirclement of Sevastopol. Von Manstein pinned the medal to his chest two months after Rostov was secured. That was then.


A thick, icy fog poured out of his mouth with each difficult breath as he panned the horizon from his Mark IV H waiting for the first vehicles of Rokovossky’s advance elements. His prized medal, frozen against his tunic.


Karl blew warm air into the view finder sight, clearing away the frost. “Nothing, Rudolph. Perhaps Ivan has run out of fuel?”


“My friend, if you don’t keep a sharp eye, I fear we will be all be introduced to eternity.”


He lowered his binoculars. “Sergeant. I see you haven’t thought the matter completely through. For us, death is a given. It tugs at us each day. It reminds us daily how frail our bodies are against steel and lead and how insignificant we are in the grand scheme of the world. However, because of its finality, we are not allowed to ponder such deep philosophical questions for fear of understanding our cause may not be as just as we’ve been led to believe. But what of those we left behind? Those who are forced to remain in our cities, manufacturing the tools we demand to continue the fight. What of them Hans? For them, death comes from the sky. Unlike us, they never see the enemy in their sights, they only hear the firing of the ack-ack batteries and the shrill sound of death falling from the sky. For them, there is no one to raise a fist to and scream for vengeance. There are few to show compassion when a neighbor or child’s body is found crushed in the rubble. Even the words of our Führer can bring no solace for their suffering, for they are only words written and spoken for an idea that is losing its light.  No Hans, we must not think of such issues. We must fight until our lungs no longer fill with air or our hearts no longer pump blood. Until that day happens, it is our sworn duty to fight for those who can not see the enemy face-to-face., line them up in a rifle sight, or hear the sound of bones being crushed under steel tracks. For them, death may be welcome since they can not perform these acts, but for us, it is not an option. We will continue to fight and die in the hope we can stop this maddening wave of death.”


He took a deep breath then raised his glasses to his cold eyes. Yes, my friend. We shall surely die in this God forsaken land. Until that day, we shall take as many of our enemy as we can.


He placed the earphones on his head over his soft cap then depressed the mic button. “Are they probing or advancing?”


“They are advancing in a wedge formation.”


“Are you sure there is no infantry support?”


“Good. Sight on the lead tank and await further orders.”


“We are going to move forward. Fire at the lead tank then retreat. With luck, they will pursue allowing you to finish off the rest. Gentlemen, good luck and good hunting.”


He took one more look across the battered landscape. Satisfied there were no other enemy units, he lowered his glasses then slide into the commanders chair and buttoned up the lid. 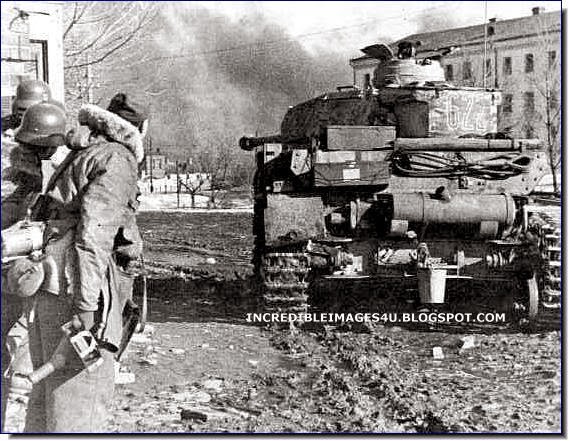 “Ruger. Start moving us forward.” He depressed the clutch, engaging first gear. A puff of white exhaust escaped through the single vent pipe as the gears took hold and steel monster began hunting.


Koenig looked through one of the cupola’s periscopes.


“Keep us clear of the patch of barbed wire. You know how easy they can foul the treads.”


“Jawohl.” The tank labored to the right.


“Karl. Keep the lead tank in your sight. Call the distance out each twenty meters. Joachim. Load armor piercing shells, only. Wolfgang. Keep an eye out for infantry. We don’t want them sneaking up and damaging a track.”


None of the men responded nor was a response necessary. They’d been together for two years and knew when an order was issued it was carried out with great precision.


“Have they spotted us?”


“Captain. To the left.” Koenig moved to a different periscope.


If there’s one, there have to be more. New plan. Once we’ve eliminated the main target, reload and fire on the SU-76. We will then fall back. Verstehen?”


The tank inched over bricks and beams. The T-34’s filling the view finder.


“Steady, Ruger. Joachim. Are you loaded?”


All six of the enemy tanks filled the cupola’s periscope. The sight reminded him of the carnage they’d wrought on the units during the encirclement of Kiev. In one day they’d damaged or destroyed over thirty units. The Russians were no match for the panzer crews who’d spent the last two years honing their skills in Poland, France and Greece. They knew how to outflank their opponents and force them to reveal the sides and rear of their units, where the armor was the weakest. That had changed. The Russians seldom retreated anymore, thus forcing Koenig and his men to fight frontal assault battles, allowing them to use their sloped armor to great advantage.


Only the most skilled commanders were capable of placing a shell in the trap between the turret and chassis. Most would attempt to shoot out a tread then move to the side of the damaged vehicle and finish it off or as was the case of late, withdrawing. To advance on the wounded beast placed many in the sites of the dreaded 76mm anti-tank crews which were accounting for more destroyed German units then all the armored forces combined.