Big changes are coming to the storied franchise in Irving, Texas. Follow the blog for updates on the release date.


“This is Skip Hansen, reporting live from Titans headquarters, in Irving. Two weeks ago, “I” broke the story about the current owner, that Mr. Bum Reason was going to sell the Titans to oilman/ billionaire Reuben Weitzman. Today, despite the NFL not ratifying the deal until the owners convene for summer talks, Mr. Weitzman has painted the logo of the Titans on his Gulfstream private jet. Granted, it’s only a formality to ink the deal, but if they don’t ratify the sale, the Titans will spin into oblivion. Mr. Reason has publicly stated, ‘he can no longer be strapped with the team’s salaries and upkeep of the stadium. If the NFL doesn’t approve the sale, then he will have no alternative but to disband the organization.’ Folk, this can’t happen. Imagine not having football on Sunday? The thought makes me shudder. Our team is one of the storied franchises of the NFL. To let it lapse into bankruptcy and obscurity is unfathomable! You, the fans, need to write as many letters as you can and call those idiots in New York, demanding they approve the sale. Without football, the entire metroplex will disappear from the sports pages. We will be known as the team that was. For me, that’s unacceptable! People, rally your friends, family and neighbors and let the NFL know, WE WANT FOOTBALL!”


“On another note, my sources inside the Weitzman camp have warned me of wholesale changes to the organization. My money is on a new quarterback. Jimmy Stone’s day is done. I’m convinced, if Coach Osburn wasn’t running the team, Stone would have been released years ago. He’s proven time and time again, he’s a decent back-up, but not an everyday starter for the Titans. His picks match his touchdown passes. Yes folks, it’s time for Mr. Weitzman to clean out the closet and rebuild ‘our’ team.”


“This is Skip Hansen signing off from Titan Headquarters.”


“What the fuck did that blow-hard say?”


“Numbered my ass! If it weren’t for me, we’d have never had a winning season the last four years. I can’t help it that the new guys can’t figure out the FLEX defensive scheme or the offensive linemen draft picks couldn’t block a pack of old ladies on walkers. Hell, it happens and I’m the one who’s been getting his ass drilled week after week after week. It’s really hard to run a play when the fucking defense is in the huddle eighty percent of the game!”


“Sugah, you need to settle down. Ole Skip’s just spouting his daily oration. He’s gotta pay the bills too. And if he doesn’t ease up on my Jimmy, well, let’s just say…. ”


“I’ll be getting a new fur coat this winter.”


“For the hearing impaired, I’ll be getting a new fur coat and maybe a real nice necklace from Tiffany’s. You know the one you won’t buy me?”


“Yes it does and I think it would look wonderful draped on my neck. Don’t you agree?”


“Charlene, anything to accentuate your neckline would be a waste of good money. Your double D’s will swallow it up just like the rookies you prey on.”


Without hesitation, she caught me with a quick backhand.


“Jimmy, when are you going to appreciate my devotions to you?”


“When you stop being the pass-around-pack of the NFL. Imagining you with old Mr. Reason is an image I’d rather forget, and none too soon!”


Some days I should keep my mouth shut. This time it wasn’t a back hand but a full blown jab to my gut. I found myself laid out on the bed with her massive breasts covering my face blocking off any chance of regaining my breath. And if that wasn’t bad enough, her diamond necklace was being tattooed on my neck. This isn’t going well.


“Jimmy Stone. I’m gonna say this one more time. Time for you to remember who butters your bread and why the Titans didn’t ship your sorry worn out body two years ago. I used my charms and wiles to convince Mr. Reason and Coach Walton that you were an integral of the team. If you left, they would lose the heart and soul of the team. Of course, the pictures of us together were instrumental in your continued employment.” She rolled over allowing me to stop from passing out.


“Your job is not to figure me out, it’s too keep playing ball for the Titans. I believe when the new regime takes over, our business fortunes are going to skyrocket. “


“Leave that to Charlene.”


“This is Skip Hansen, reporting live from Love Field. It’s official. The new owner, Reuben Weitzman has landed. I’ve asked for an exclusive interview with the potential new owner. His staff was kind enough to allow me the first, exclusive, on the site interview. That’s right folks, I get the first glimpse and words from the man who will rebuild our dynasty and return us to ‘Grid Iron Glory’!”


“Charlene. Is that the new owner standing behind blow-hard?”


Hansen whipped his head around.


“The man who you came to interview.”


Most reporters would have lost their composure and soiled their pants; not Hansen. He remained cool under fire.


“Yes, sir. And I want to welcome you to our humble state. I have been telling my viewers how they need to light up the New York lines, demanding the sale go through.”


“How kind of you. I’m sure your viewers will do exactly that.”


“Yes, sir. They are extremely loyal. I can almost guarantee the boys in New York will approve the deal post-haste.”


“Very nice. Now, do you have any questions for me, or do you plan on continuing to regale yourself?”


“Man! Hansen was just told to fuck himself and he doesn’t even know it, babe.”


“Can you tell my viewers and fans what sweeping changes you’re going to implement?”


“No, but I’ll tell the faithful Titan fans what I have in-store.”


“I can’t go into specifics at this time. I’ve been following this team since it was a dominant power in the 70’s. It pained me to see the franchise falling from dominance. I don’t blame current Coach Osburn for all the team’s short-comings. He and his staff drafted well, but when the top picks don’t pan out or remain injured all the time, it’s difficult to put a winning product on the field. As of today, I’m planning on keeping everyone in their positions.”


“My sources indicated you were going to replace Coach Osburn with a fellow college teammate.”


“Mr. Hansen, I don’t deal in speculation. At this time, Coach Osburn will remain an integral part of the team’s staff. I have no plans on wholesale changes at this time. It would be detrimental and unproductive if I were to come in and release one of the NFL’s top coaches. The man won two Super Bowls and countless NFC Championship games. It would serve a terrible injustice to ditch the man who endured the ‘Frigid Bowl’. No, at this time, Coach Osburn has my one hundred percent backing.”


“Fair enough, Mr. Weitzman. What about the quarterback situation. Jimmy Stone has one of the lowest quarterback ratings the team has ever seen. Will you and your staff go and a find a top rated quarterback in the draft? Based on my evaluations, I believe there is an excellent crop available. In fact, if I were you, I’d throw my chips on….”


“Excuse me, Mr. Hansen. Is this my interview or yours? I seem to be confused.”


“Exactly. You’re excused. In regards to personnel, I have no plans on wholesale changes. I will meet with my staff and evaluate each and every player on their own special merits and contributions to the team over the years. Now, if you’ll excuse me, I have more important meetings to attend, where people actually listen.” With that, Mr. Weitzman walked towards the waiting limousine, adorned with Titan flags.


“Folks you heard it first from Skip Hansen.” He motioned for his cameraman to stop filming.


“Yep, boss.” Good thing he didn’t ask if I stopped the recorder.


Mr. Weitzman looked back and waved at the Titan faithful. No one heard his words as he waved, with a smile. “What an arrogant ass.”


“Damn, honey. Did that really happen? Did Weitzman just break it off in Skip?”


“Sure did, honey. Sure did. Think I need to pay his cameraman Robert a visit.”


“Come on, Charlene. Are you kidding me?”


“You’d be amazed at the dirt they can give a girl.”


Mr. Weitzman walked in the war room of the Titans. The look on his face wasn’t welcoming. He scanned the cramped room making sure his team was all present. While the press was focused on him, none of them thought to camp out at Titan Headquarters. His group was notified to arrive by 5:00am. To ensure the secret was kept, he’d hired his own security force. They were given succinct instructions concerning complete privacy. Any leaks would be dealt with harshly. If a person’s name wasn’t on the list, they were not allowed admittance—no exceptions!


“Gentlemen, it is time to rebuild the organization from the ground up. Barton, I want you to find a new place for our headquarters. Smith, I want you to look into covering up the hole in the roof. Williams, I want you and Roberts to start calling all the colleges about the top prospects. Any questions?”


“Go ahead, Coach Jankowski.”
“When are you firing Coach Osburn?” 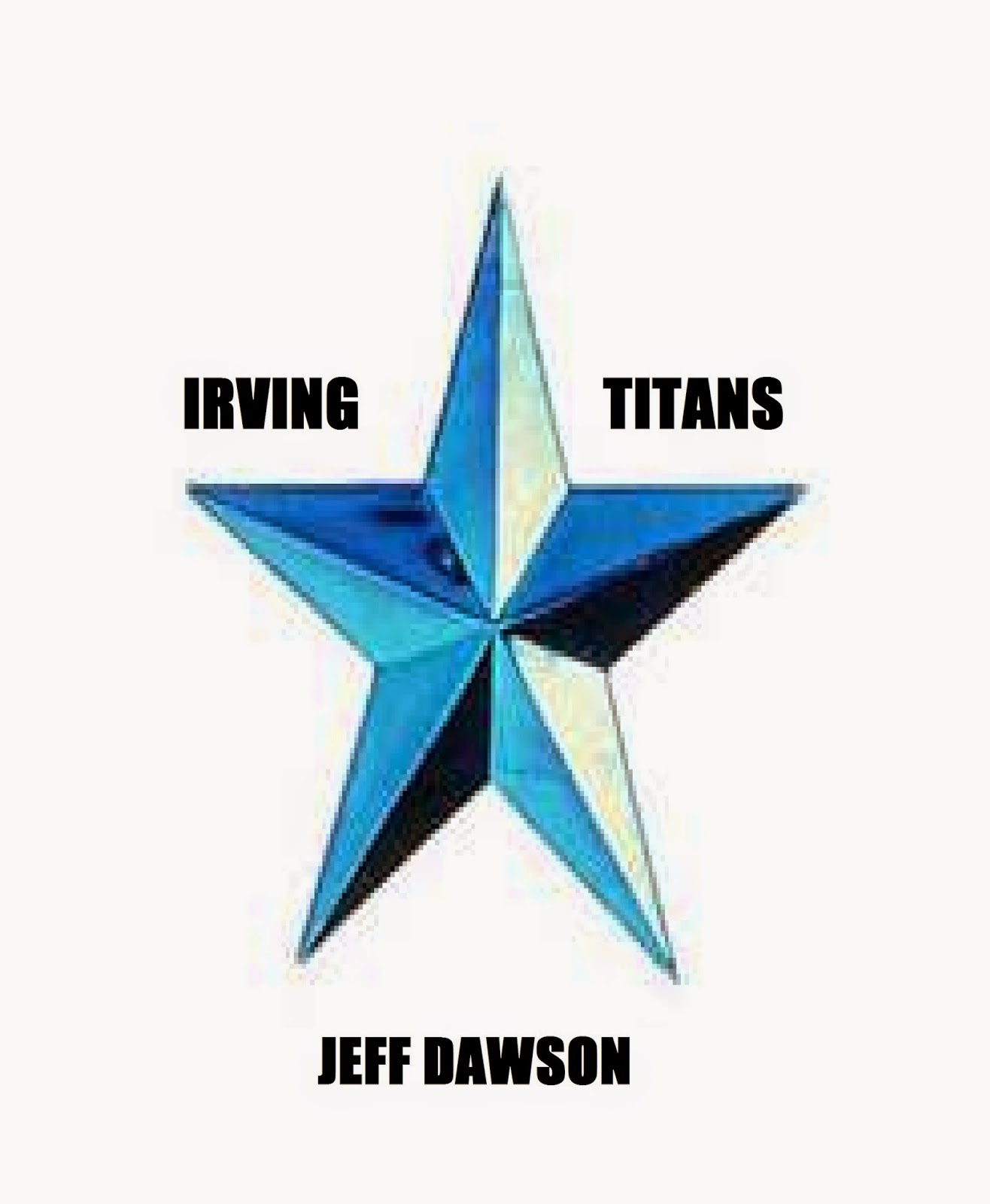 
In order for us to chart a new path it is necessary to remove all negative influences.
Posted by Jeff at 6:59 AM No comments:


We will never achieve our desired goals if we allow the ills of the past guide our way.
Posted by Jeff at 7:11 AM No comments:


When we understand clarity our goals become clear.
Posted by Jeff at 7:28 AM No comments: