Coronavirus versus the US Congress.


As of today, March 13th, Planet Earth is closed! This action is necessary to accommodate the rampant stupidity flying across the planet today. It has also been reported, by unnamed sources, that the Martians and Mercurities have diverted their invasion forces. Why? It was once thought by their leaders they would find intelligent life on Earth. For eons they watched our planet evolve. They marveled at the technological advances those puny humans made. In one century, they made great strides in medicine, weapons, philosophy, empathy and to a degree enlightenment. They were wiping out crippling diseases, extending life expectancies and reducing birth rate mortalities.
At one point, they feared the planet was in trouble in 1918. A disease unknown to the foreigners swept across the planet decimating a third of its population. But they rebounded and forged forward. Still, man continued to battle back. They noticed other diseases that were rampant in the human race. After intercepted messages they learned of Small pox, Cholera, tuberculosis, whooping cough, typhus Polio, measles, mumps and something called Eboli.
By the Earth calendar another cataclysmic event occurred, they called it World War Two. While both of the invading armies were familiar with war, what they witnessed was frightening. With the exception of a few countries, the Earth was on fire. In the end, they wept for the 60million lives the conflict extinguished. But once again, those people on the paradise planet prevailed and came back stronger, smarter and more resilient than ever. But then, the tide began turning in a way no one could foresee.
The invention of what the Earthlings called the, “I-Phone” made connectivity to all humans possible overnight. Information could be sent around the globe in a matter of seconds. Truly, it appeared the time was ripe to move-in and glean the fruits of this advanced societies advances. Or was it?  There was one invention they took for granted-Television. On the surface they admired the technology and found it amusing at times. They were amazed at how a race so advanced could be so enthralled with a box displaying images. A once proud planet that thrived on hard work, resiliency and physical exertion was becoming complacent, lethargic and lazy. Still, if they got there in time, the prize was  worth taking.
And then the unimaginable happened. They watched through their imaging devices a panic unseen in their centuries of studying the planet. A mass panic was gripping the planet. Was it a coming war? Was a natural catastrophe occurring? Were the bodies of water rising? Were storms ravaging the surface? No. It was none of these. Then what could it be? The question was answered when then decided to examine those boxes that were in every household across the world. For those that didn’t have one, they were found congregating at other gathering places glued to every word the other humans were saying. Why?
When they found the answer they were searching for, they were shocked. This race of people that had endured, suffered, risen again and flourished were being convinced that the world as they knew it was coming to an end. Something called Coronavirus was sweeping the planet and it was the people in the boxes who were spreading the word. But it wasn’t only the words they spoke it was the way they spoke. They found themselves mesmerized by the bright spot lights, the smartly dressed hosts and the headlines that kept changing. For several days they too, became transfixed with the box and those who kept talking to them. When the commanders of the invasion fleets were not receiving daily reports, they decided it was time to investigate what was going on.
They were shocked! None of the normal duties or maintenance operations were being performed. Drills had been canceled. Debris littered the once pristine floor. When they identified the problem and held a high-level conference, they came to the same conclusion, in order for them to achieve their goals, they would have cut the transmission and attempt to regain control and discipline. They knew there could be backlash, but it was worth the chance. Without asking for consent the transmission was cut. The initial reaction was as expected. A few cases of mutiny were logged. Many of the soldiers displayed acts of depression and withdrew from the others. Sick bays were crowded with lethargic, lazy, mindless individuals. They had lost the ability to think for themselves and function. In a week, there were signs of improvement. The doctors verified the leaders fears-it was the box that had caused the epidemic. Turning off the box was the best medicine.
With this new found information, both forces convened a military conference to discuss future plans. It was agreed, at this time, all plans of conquest were put on hold until the people of the planet were able to regain their senses and become the resilient race they had studied and admired for centuries.
During the conference one of the leaders who was considered an expert on the human race brought up a saying he had gleaned from his intense studies that came from the 1980’s, earth time. It was, “garbage in, garbage out.” At the time, the saying baffled him. No longer. After studying the mysterious box and reading the doctors reports, he now understood the words and their effect on the human race. How would it effect his people? It was decided, the risk wasn’t worth it.
See, they weren’t coming to conquer the planet in a sense, they were coming to consume those they had been studying and one must be careful what they consume, shouldn’t they?

Think you vote doesn't count? Think it's not your problem and some else will handle the problems? Think again. I did a comparison of the Super Tuesday results and compared them to the 2016 election. You draw you own conclusions. Bottom line, get out and vote. Your vote counts! 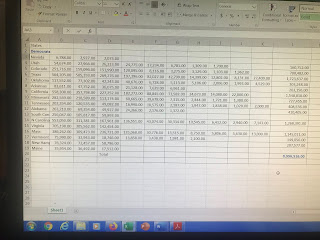 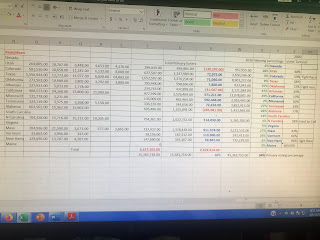