Something you didn't know. Despite being serious all the time or fired up when it comes to baseball, don't think I can't let loose. Being Halloween, I'm reminded of the first time I took Debbie to see "Rocky Horror Picture Show." Yep, I was dancing in the aisles, using my bic lighter and singing all the songs. If you've never been to the show, you don't know what you've been missing. The greatest audience participation movie ever! If you've never Time Warp, now is time to get off the couch or your chair and join in. Recognize any of the actors? It's just a jump to the left! YES!
Posted by Jeff at 2:09 PM 2 comments:

Email ThisBlogThis!Share to TwitterShare to FacebookShare to Pinterest
A few more baseball posts. I promise to get back on book reviews and other exciting items once the World Series is over. I just need to vent over a few issues that really get me fired up!

Sunday
This has to be the wildest World Series I can remember. Forget what the wonderful analysts are saying and take in the game. Last night's Obstruction call was the most bizarre play to date for a winning run. Let me guess, it was a walk off obstruction call. I know Ferrell had to argue or attempt a debate. The look on his face and the rest of the Red Sox and Cardinal players had them all stumped. "He gets home why?" "You've got to be kidding me?" "Nope, run scores. Read the rules." And Jim Joyce made the call immediately. No hesitation. No afterthought. You can see him in the top right corner pointing at the play and giving the appropriate sign. Talk about exciting! We've seen multiple errors, a slew of pitchers, great and not so great defense. This is why we love the game. We never know what's going to happen. Can't wait for game four. This is a series where I would love to see the best of nine!

Monday
Troy Aikman needs to worry about calling football and not commenting on last night's ballgame. What did he say, "It was a shame the game ended that way?" WTH? Shut up Troy. Worry about football. Was it shame Beltran bruised his ribs running into the wall or perhaps, it was sad Hunter flipped over the right field wall trying to make a spectacular catch. Troy, you have enough trouble calling football, so, for our sakes, leave baseball alone! While you're at it, invite Joe Buck and Tim McCarver over for dinner. With luck we'd get Tony Francona and Vin Scully to call the game. Now that would be a great tandem.

It took me a while to get fired up, but it finally happened. How many time during game four were we inundated with how game three ended and what a TERRIBLE end it was. For who? The Cardinals? The Red Sox or the analysts? Well, it wasn’t one and two. That’s right, number three. The so called experts didn’t like the outcome because they didn’t know the rule until it happened. Well, wah, wah, I’ll be nice, wah! It’s a rule. Deal with it. I almost puked when Joe Buck was beating his chest because Joe Torre announced, MLB will review the rule. Why? It’s a rule, just like interference, dropped third strike, infield flies, balking, fan interference, and a host of others. What if the game winning run would have scored off a passed ball, wild pitch or God forbid, a dropped third strike. Yes, there was one out and first base wasn’t occupied, so the batter could have advanced to first. Remember, with less than two outs and first base occupied, the batter is automatically out. All other runners would advance at their own peril. Imagine an overthrow to first allowing Molina to scamper home, or Jay grounds to Pedroia who wings the ball into the stands or dugout. Result—run scores, Cards win. I guess if Uehara would have balked in the winning run that would be acceptable. Not even when the cows come home. The analysts would have been freaking out because they don’t know the rules surrounding a balk. They need to shut up and call the game. Instead of running their mouths, they should spend more time reading the rules and letting the game call itself. Where’s Vin Scully, Don Drysdale, Howard Cosell, Tony Kubek or Joe Garagiola when we need them? I know where they aren’t, on MLB or in the FOX Broadcast booth. There should be a rule concerning ignorant announcers. Wow. That would thin out the field in a heartbeat. On to game five.
Posted by Jeff at 10:05 AM No comments:

Good morning across the globe. Getting geared up for multiple posts and vlogs in the coming weeks. To kick it off, starting to get a few reviews for Destination D.C.  The question of the day is, does Destination DC need an intro? I've been struggling with this for over a month. Yes, if you haven't read Gateway Pioche, it's gonna be tough to know what's going on. In fact, I saw where a copy was purchased in Germany then returned. No problem, but I'm think it's because they felt lost with the second one.

Okay, here two new reviews. Amazon review, Rise of the Fourth Reich. Both are really good reviews without giving away too much of the story. I need to try and incorporate their thoughts with the introduction.

What else is going on? BASEBALL! I don't post about it very often, but I am a huge baseball fan and this World Series is living up to all the expectations. We have seen everything from multiple errors, bad defense, great defense, base stealing, outstanding pitching, bases loaded, no outs and still a run can't be knocked in.

Last night's game ended with the most bizarre play I've ever seen and I've seen a lot. I used to coach and umpire the game for over twenty-five years. But I've never seen this play determine the final run of a game. Here's the link. Cardinals Win on Obstruction call.

What a wild game! Can't wait for number four tonight. Too bad this isn't a best out of nine series.

Ravenz Reviews: Books to read for Halloween: This special blog post showcases several books to get you in the mood for Halloween! RIVER OF BONES by Jodi Cleghorn River of Bones is...
Posted by Jeff at 9:45 AM No comments:

Two works of Horror and Suspense

It's the witching month, yes it is! And what better way to kick it off than with two books sure to keep the lights on past midnight.

Terror at The Sterling is loosely based on actual events which occurred at the hotel. An unsolved murder from the mid seventies and a most peculiar eviction. My friend, Lee (Mel Thornton in the book) and the desk manager were asking two residents to move out based on non-payment. The pair agreed they wouldn't trash out the room. Well, Lee went to check on the room. His key didn't work. He called the desk manager to bring another key. His didn't work, luckily he had a master. When they opened the door, the room was completely trashed. Furniture broken, trash strewn on the floor, windows broken, A/C missing and the TV split in two. They couldn't believe it. They went downstairs and found the two guys. They both described what the room looked like. The evictees stared at them in disbelief. All four made their way back to the room. According to Lee, only ten minutes had passed. When they came back to the room, it was in pristine condition. Armed with theses tidbits of knowledge, I wrote,  Terror at The Sterling  "Click the title to purchase" 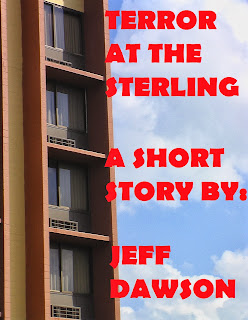 The next book is, how shall we say, a bit different. I've studied WWII for over forty years. Three years ago, the lady who was taking care of my mom suggested I write a love story about WWII. Nope, not doing it. Saw, "Enemy at the Gates." Not happening. I then called my deceased finances daughter Jessica, and asked her if vampires were still big. She gave a big thumbs up. Okay, can I combine WWII and vampires into a plausible plot? After months of deliberating, I came up with Occupation. Plain and simple, this book is about evil versus evil. I think Joey Pinkney describe it best, "anti-heroes slowly form and lines become blurred." At times, do you pull for the SS or the Vampires? That's what he was eluding to. In the end, I believe the battle lines are clearly drawn. The work captures the brutality of both sides. Not for the faint of heart.
Click Title to PURCHASE: Occupation 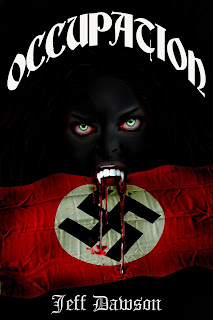 Happy reading to all!